I made the trek out to UBC Botanical Garden for their annual Apple Festival on Saturday, and I a great time!  Apples have been my favourite fruit for as long as I can remember, so I may have had more fun than you average festival goer – I confess.  Proof: I dont eat an apple a day to keep the doctor away, I eat them daily just because I love me a good apple to start my day.

THe festival was a great family-feeling day, the sun was out and the air was crisp – a perfect fall day – fitting for this fruit du jour. For the low entry fee of $4, we were given access to top local Apple producers and fresh orchard apples.  There were tons of apples available to choose from, here is the list from their website.

Every year  44,000 lbs of apples are sold at this festival in 2 days, including more than 70 varieties, new and old, conventionally grown or organically. Amazing. 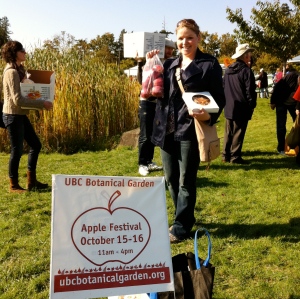 On my way out of the festival, apples and some homemade apple turnovers in hand!

We had the most amazing pocket-pies, sold by a Squamish baker in the middle of the apple market. They were to die for, flaky but dense pastry, filled with the perfect ratio of fresh apple filling to pie crust. I will return next year just to have another apple-pocket.  I went for the classic apple, but there was also rasberry-apple, and blackberry-apple combos, among others.

The whole festival was like being at a giant farmer’s market, but the only thing people had to sell were apples. They did have the popular Ambrosia apple – did you know that this particular apple was hybridized in Cawston, British Columbia? Pretty cool!

I ended up choosing three apple types: the Ambrosia, Gloster and Topaz. All of them are great in different ways. Ambrosia I knew would be wonderful because I’ve had them before. Topaz and Gloster are also good, Topaz being more tart but tasty. Gloster reminded me of a red delicious a little bit, a mellow flavour. I brought the latter two to work to share with some colleagues and the Topaz won the taste test there!

The Topaz: A dessert apple, best when just picked. Tart but sweet, and crisp. Smaller in size, like a macintosh sort of (but the fruit is more dense)

The Gloster: a dessert and cooking apple, tasty but not as sweet as the Topaz.

I highly recommend this festival, and I plan to go next year for sure. MMM Apples…