Well, wedding season is coming to a close. As a baker, I caught the tail end of it while baking my friend’s wedding cake and cupcakes – as my gift to the Bride & Groom.

The wedding was last weekend and it was beautiful. An outdoor ceremony with weather that cooperated at the 11th hour. Oddly the weather worked out well for me too, not too hot otherwise buttercream melts in warm weather.

It was also a reunion of friends that haven’t been together as a group in over 10 years. Basically, since most of us finished university. Love was in the air, old friendships across every table, bursting with laughter and good times.

I met with my friend earlier on in the summer to come up with a plan for the cake, and look, based on their wedding colours etc. This photo was the inspiration from the bride, a simple elegant design covered in buttercream (and no fondant).

This wedding cake also marked the end of summer for me because I had known I would make the cake before pastry school ended. Then when school did end I had this cake on my schedule. I’ve baked a wedding cake before, for another friend’s wedding a few years ago. I followed a similar plan, and organized myself well, also following lessons learned in school. I was pretty confident about the whole baking part.

Everything went really well, in short. But I still learned many things. Which is always good. I would have to say that the delivery of the cake is what stressed me out the most, and I imagine that is something that never will become easier.

With time to spare, I baked and frosted all the cupcakes (all 9.5 dozen of them) and each of the two tiers for the cake. Delivery on the day of went well also, and I stacked the two tier cake near the venue. I couldn’t set it up at the reception because there wasn’t enough space. So I had to deliver it later. Which is fine, I had lots of helpers, and we made it work. But here are some of my takeaways:

First challenge/lesson: attending a wedding and baking the cake is a big ordeal. It is manageable, but rather than just showing up on wedding day and dropping it off (which is still big in itself) as a guest you have to plan to have it ready even earlier.

Second challenge/lesson: always have an apron, which I did. When I was finishing the cake, with the flowers, I was all dressed up for the wedding. I am glad I thought ahead and had my apron, or else I likely would have had frosting and flower bits all over my dress.

I added the flowers and cake topper, provided by the wedding coordinator, on the morning of. Then left the cake stacked in a safe place just a few minutes from the reception venue. Attended ceremony – it was beautiful, I might have teared up, or maybe it was something in my eye? Then we headed to the reception hall to wait for the reception to begin, I steered clear of any complimentary beverages until the cake was done, I was tunnel visioned on making sure that cake was nothing short of as perfect as it could be.

Third challenge/lesson: always connect with the catering lead and the coordinator about where the cake should be set up. One said we did not have room, and the other said we did. It is not an issue at all, but I learned later that I could have just set up the cake at the reception instead of off-site, and avoided the next challenge of final delivery. There was a spare table after all.

So we headed off-site to collect the cake. 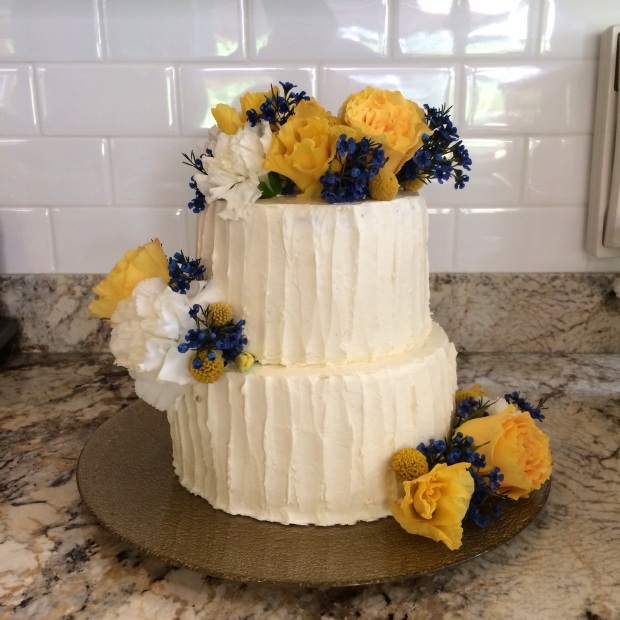 The cupcakes were stored in large bins with lids, which easily stack in a vehicle. The tiered cake was first packaged in a box for each tier, then once I stacked it on the display platter I did not have a box large enough to carry the cake.

So, I held the cake in the car as we drove back to the venue (literally 5 minutes away). The drive was smooth sailing, my hear rate was not. But the cake arrived unscathed, in perfect condition. I walked it over to the cake table and voila. I felt like my job was done. But not quite. 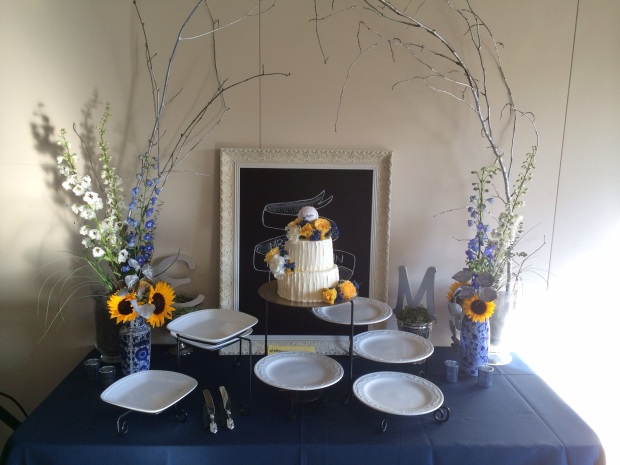 We tucked the cupcakes out of site, until they needed to be served. The wedding coordinator felt people might take the cupcakes if we displayed them too early. I mildly disagreed, thinking, “who would eat cake before the bride & groom?”. We agreed to leave them tucked away for now.

Fourth challenge/lesson: Do not serve your cupcakes /desserts too early. After dinner was happening, I thought it was safe to put the cupcakes out, and fill the plates that flanked the cake. I figured it was a safe time to do so. The wedding coordinator did an amazing job with the table setting, it really made the cake look amazing. I felt proud and happy that it looked great for the Bride & Groom’s special day. 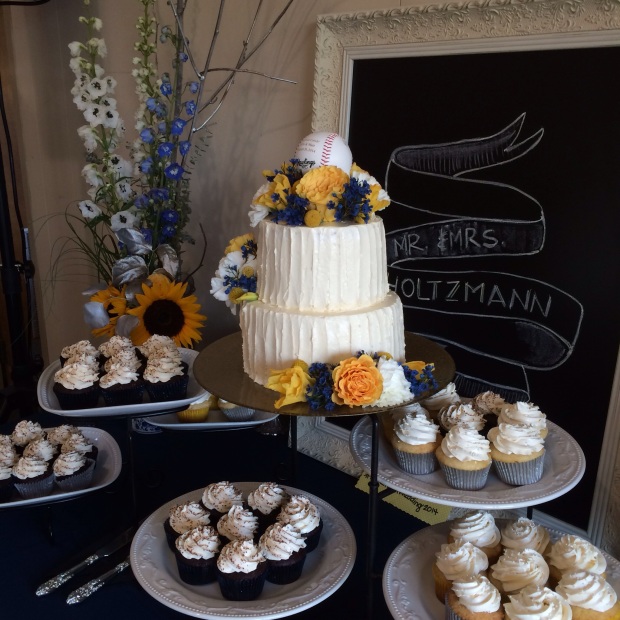 I mean, this is the first dessert they eat together. I just love knowing that I baked their cake, I made it look good. And I enjoy watching cake disappear… That is what it is made for. The faster it disappears is usually a good sign too. But not too soon… Oh my.

As soon as guests finished dinner they started plucking cupcakes from the table. One by one they were disappearing. We had enough cupcakes to keep the plates stocked, but the “official” cake cutting ceremony had not happened yet. Speeches were still underway. Guests started sneaking cakes as they returned from the washroom or bar. I was seated close to the cake table and saw it all happen. It was hilarious (and a little nerve-wracking) for me to watch what people will do for a cupcake!

I became consumed by the speeches, they were beautiful and funny. Then I turned around to check on the cake and realized a whole plate was missing from the cake stand! OMG.

I just wanted them to have one photo of the cake with the appropriate amount of cupcakes to stock the plates. That is all I wanted. Then the dance floor opened up and dancing began. Cupcakes started to disappear even faster. I realized there were no more left to stock the plates, so another friend and I started to guard the cake table! Seriously. I felt bad, but at the same time, we didn’t have sign to say “don’t touch”, and the cake cutting was not scheduled until much later. I talked to the wedding coordinator and we managed to get the cake cutting to happen earlier. Yahoo!

Photo moment captured (looking forward to the photographer’s photos, which will be better than mine!). My job here is done. Let them eat cake. 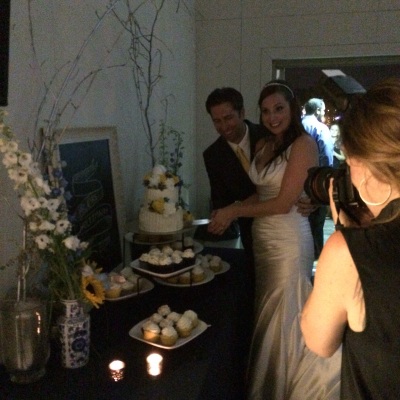 The top tier was saved for the Bride and Groom later, and everything else disappeared at the reception…. Excellent.

It was an adventure for me. I loved every second of it, and I would/will totally do it again. After each cake baked, I learn how to improve the next one. I promise you will enjoy your dessert if it comes from me, that is the only way it should be.